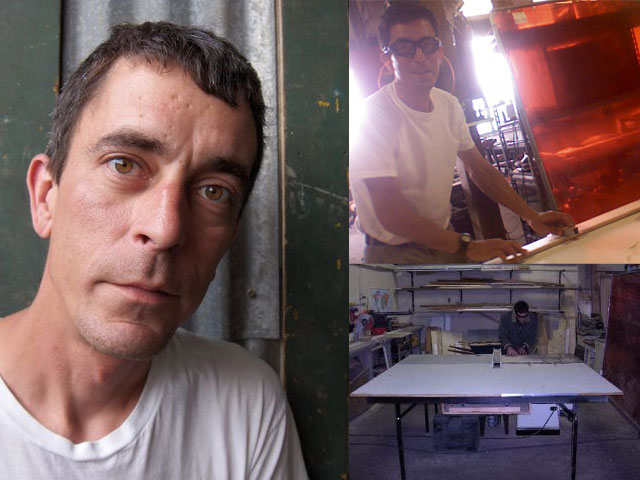 Snapshot of John at work at Waypoint Studio.

Born in Houston, Texas in 1967, I grew up from the age of 3 or 4 in the once small and liberal city of Austin, Texas. I believe that my earliest leanings towards art and creativity were enhanced and nurtured by the exceptional environment of Austin in those years.

After graduating from Austin High in 1987, I began attending the University of North Texas. It was in the course of my studies there that I began to find my voice as an artist.

While all of the faculty there were outstanding, It was my Metalsmithing professor, Harlan Butt who most inspired me to push my expression to its limits. His work served a high water mark for the seamless attachment of fine craftsmanship to conceptual clarity.

I received my Bachelors degree in 1991 and returned to Austin. From 1992 to 1996, I started up a studio with another artist and worked as the preparator at the Austin Museum of Art. I was also working full time as a carpenter, and my skills in that trade began to mature. In 1996, I relocated to the small rural community of La Grande, Oregon. I became a licensed contractor and have been operating my own remodeling business ever since.

Since joining Waypoint Studio in 2004, I have enjoyed a renewed and strengthened commitment to moving forward with my artistic pursuits. My exhibition successes and increased production in these recent years have been deeply rewarding, and I am dedicated to the continuation and advancement of my artwork and my contributions to Waypoint Studio.